Thanks to careful watering, there is still a green garden oasis beside the tinder dry bushland. Picture: Trina McLellan (iPhone 4S)

You know when summer has set in where we live in south-east Queensland.

In the aftermath of protracted Christmas celebrations, the crickets are now nearly deafening in the surrounding bushland, while the sounds of the game of cricket are an almost endless stream from the television.

You can almost eat the muggy air, despite a lack of rain. Indeed, that very moisture is being dragged out of flagging flora and quickly sapped from bodies brave enough to venture outside for any length of time.

And the familiar sounds of bat on ball – followed by loud, long cheers – will waft over the back yard from the neighbour working on his fence on an overcast morn and listening to wickets fall on his portable radio.

But it’s the really tough survivors of nature you have to admire: The garden plants that seem to tolerate – far better than humans – days of 30+ degrees Celcius (85+F) with the occasional temperature spiking 38C/100F or higher for good measure.

As long as you give them a drink occasionally, these stayers thrive pretty well, while sensible human beings have long retreated inside to the luxury of air-conditioning, usually from early morn to late evening and, very occasionally, restarted overnight if sweaty bodies find it too hot to sleep – even under ceiling fans.

Everyone on our side of the city is praying for a decent summer storm or two to bring some badly needed rain and to drag down the temperature to a bearable level.

Oddly enough, every one of the storms the city has had so far this season – well over a dozen – seems to have tracked across the southern suburbs or well to our north, leaving us with bated breaths on the northern outskirts of Brisbane.

The hot summer weather and lack of rain has impacted heavily on nearby trees and undergrowth. Picture: Trina McLellan (iPhone 4S)

You see, we’re trapped in a nominally sub-tropical climate that, at present, feels more like it’s bordering on a desert climate:  The grass is so dry it crackles underfoot; the undergrowth in nearby bushland is dying off and adding to an already worrying fuel load.

And, being surrounded by 35m high trees on three sides, our home misses any cooling breezes that might come along during the day from most directions – they seem trapped above the canopy while all around us at ground level the air remains still and stifling.

During this weather, any outside activity has to be done in the very early morning, very late evening or under cover of heavy cloud.

Even then, regular refreshments are needed to replace the perspiration that begins trickling down the crevices of your body after only a few minutes of exertion.

The lone, desolate cry of a hungry young kookaburra has been piercing the air all morning.

This fledgling is following its mother around as she hunts assiduously for any remaining portable protein to ferry back to her vocally demanding offspring, but the pickings are slim and they’re diminishing daily. The absence of siblings is evidence enough that the fauna are suffering too.

The lone, desolate cry of a hungry, young kookaburra has been piercing the air this morning.

Three summers ago a decade-long dry spell broke in our region in the most spectacular and horrendous way.

That summer started with a respectable return to more normal rainfall levels. But it brutally culminated in early January 2011 when an astonishing third of our city was inundated after torrential downfalls spawned a deadly inland tsunami that washed away not only 19 lives but also so much precious topsoil from one of our state’s most productive food bowls in the Lockyer Valley.

All that soil was eventually deposited as an enormous, muddy plume into Moreton Bay, up to 150km (95 miles) to the east, along with the detritus swept from flooded riverside suburbs along the way.

The following summer brought generally good follow-up rain but then, at the beginning of this year, summer stabbed many areas with the nasty, windy remnants of a small but ominous cyclonic system that simply refused to go inland as a rain depression, instead retaining the strength of a tropical storm and dumping crippling downpours on pre-soaked centres as it hugged the coastline and worked its way south, all the way to Tasmania (three states away).

But this year the soil to our west – and here in town – is far more likely to be blown away.

The Bureau of Meteorology’s rainfall map for this month shows just how dry it’s been in many places in our state (our region is currently yellow, meaning it’s had only between 10 and 25mm of rain so far this month, when its 30-year average for the month of December is between 200 and 300mm).

Who knows, going on past summers – and weather patterns made even more erratic by cyclones usually to our north – we could get flooding rain in a few days or weeks, but we’ve not seen decent rain now for six months or more and we’re not alone, with drought declarations in at least 25 of our state’s 74 local government areas.

Experience has taught us to plant wisely, to eschew – or heavily protect – tender flora, instead choosing hardier shrubs and climbers that can tolerate the protracted heat as well as a the occasional 360-degree turnabout in rainfall that can mark southeast Queensland’s unpredictable summers.

But even our usually super hardy Papa Meilland roses – which are still blooming despite the heat – are withering within days.

While hardy Papa Meilland rose blooms last for a couple of weeks in spring, in a hot, dry summer they wither much faster. Picture: Trina McLellan (iPhone 4S)

And our usually showy groundcover tricolour jasmine (trachelospermum asiaticum ‘tricolor’) has practically lost all of its variegations and is curling up its leaves to survive the swelter. 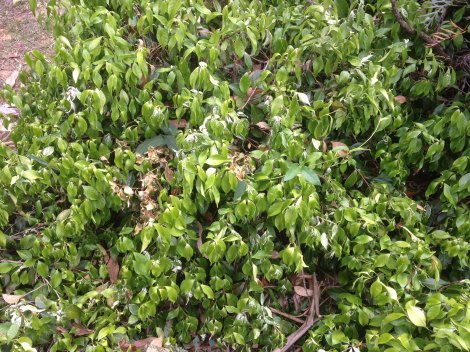 Even the tricolour jasmine is shielding itself from this year’s blast of summer heat. Picture: Trina McLellan (iPhone 4S)

Thankfully, among our garden plants there are still a few showy individuals. Here, for your viewing pleasure, are three of them: a tri-colour frangipani (plumeria rubra pink), its white cousin (plumeria alba) and a gorgeous deeper pink version (plumeria rubra tricolor), all framed by the dry bushland behind them. 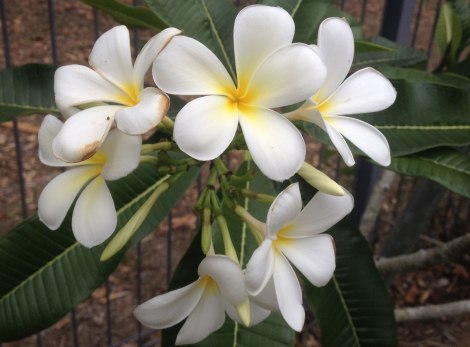 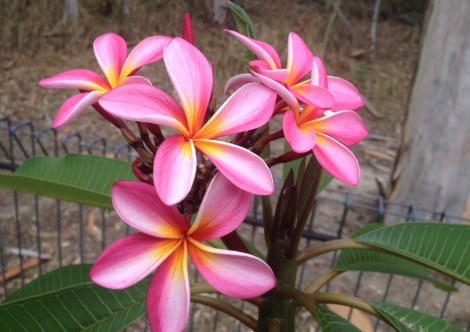 For us, their heady scent marks the arrival of summer (it’s a pity that can’t be shared as well).

It’s now up to us to ensure they don’t expire over the coming weeks, whatever the rest of summer’s weather holds in store for them.

If you like what you’ve read here, you can see more posts at reporting4work.com.au, or keep up with all new posts by liking the reporting4work Facebook Page