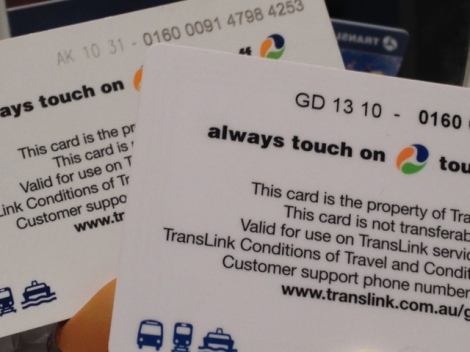 Now there are two go cards but, unless both are registered, the funds from the original will remain locked up. Registering them will disclose every trip made. Not cool for a journalist!

WHAT is it with “a lot” of Translink’s go cards expiring before the cash stored on them has been spent?

And why, when this happens, should commuters be forced to register their personal details to recoup any unspent amount or to have it transferred to another go card – which, of course, must be registered?

As an irregular public transport user, some time ago I chose to buy a go card ahead of a one-way trip from Brisbane to the Gold Coast.

I purchased my go card at a retail outlet – because at that stage you could not purchase them at railway stations – and placed $50 credit on it after having read the accompanying brochure carefully.

For reasons of privacy, I declined to register my card, which was an option outlined on the brochure. I certainly did not see anywhere on the brochure  – or the go card itself  – that it would “expire” after so many months of inactivity.

All went smoothly on the Gold Coast visit and I placed the card in my wallet for future use. It was used again late last year, without incident – on a short, single journey – and has since sat unused.

This week I needed to go across town to a busy university with limited parking. However, at the train station when I swiped my go card – which would still have tens of unspent dollars – the machine told me the go card had “expired”.

Asking at the station’s counter, I was told go cards that had not been used for more than three months were automatically inactivated and that I would have to purchase a new one then contact Translink to arrange a transfer of those funds a new go card.

Neither the original card nor the new one I was forced to buy has an expiry date on it.

When Translink was contacted, I was told that, to recover my money, I’d have to register the original and the new go cards. If I acquiesced, that would mean Translink, in the end, got its way and could have not only my personal details but also a trip-by-trip record of any trips I had made.

The operator assured me that go card expiry happens quite a lot but, apparently, only some cards are set to expire after a year. When I assured her that my card had indeed been used within the past few months, she then said that “some retailers” had shorter expiry periods.

She said if I didn’t want to register the cards I would need to go to the Translink website and download a claim form and send it in.

What errant nonsense. This is supposed to be a smart card system, a stored-value card, not a sneaky tax on wary commuters nor a tool to expedite potential invasion of privacy.

Given Translink already automatically receives detailed statistics of all travel by all go card users, why does it need commuters’ personal details to be matched to a particular card?

Ostensibly it’s to return misplaced cards to their rightful owners or to allow users to monitor their usage online. However, if a commuter is willing to take responsibility for their card and travel without Big Brother, then that should be their choice.

Instead, those who opt to do that are clearly being penalised.

What purpose is served by tracking every one of a specific customer’s travel movements when they do not wish to provide that information? Surely this is an egregious breach of privacy?

More importantly, given the heavy premium on paper ticket prices, how much of a disincentive to use public transport is a stupid policy of this sort?

And how much are the State Government’s coffers being expanded by quarantining cash remaining on lapsed cards that infrequent travellers are unwilling to register?

Trina McLellan is a freelance writer and editor who lives in Brisbane, Australia.